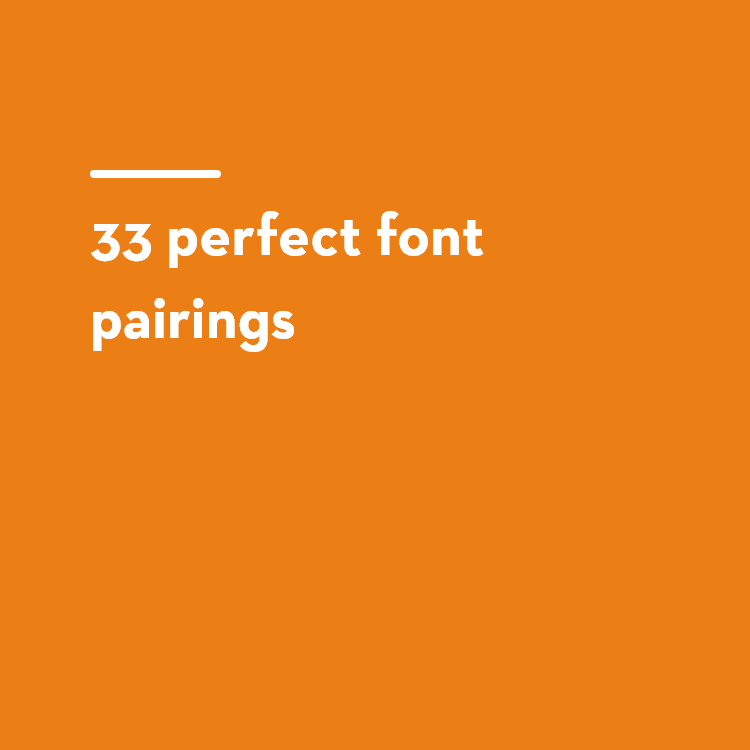 Need some type inspiration? We reveal the font pairings that were just made for each other.

Finding font pairings that set each other off, don’t fight the eye for attention, and harmonise without becoming homogenous and dull is an art. The age-old rule goes: concord or contrast, but don’t conflict.

But with so many professional typefaces and free fonts to choose from, how do you find two that work in harmony? Read on for our pick of the best font pairings – or jump to the end of page  for some top tips on finding your own. If you need to brush up on your typography knowledge, take a look at our guide to the different font types you should know.

Alegreya is a super-family that includes sans and serif sister families alongside this small caps version, designed by Juan Pablo del Peral for Huerta Tipográfica. The family has a slightly calligraphic edge, and is designed to be suitable for long blocks of text. However, the small caps variant is best suited to headers. We suggest pairing it with Source Sans Pro, Adobe’s first open source typeface family, designed by Paul D. Hunt.

For a delightful font pairing with an unintentionally tropical theme, try Pacifico and Quicksand. The former is a pleasingly free and flamboyant brush font that’s ideal for use in headings. The latter is a sans-serif with rounded terminals and some quirky touches – including that distinctive descender on the uppercase ‘Q’. Quicksand was actually also designed as a display typeface, but it’s clear enough to work well at small sizes, too.

04. Julius Sans One and Archive Narrow

If you’re aiming for a professional look, this is a great font pairing to try. Julius Sans One works only comes in one weight and is an all-caps font, but it’s a top choice for a display font, with its fine stroke and broader baseline. The more geometric Archivo Narrow is a perfect match. It has been designed to work equally well in print and digital.

Display font Playfair draws inspiration from the period in the 18th century when quills were being replaced by pointed steel pens. This, alongside printing developments, led to high-contrast letterforms with delicate hairlines becoming popular. Elegant sans serif Raleway makes a perfect font pairing.

Oswald was launched in 2011 as a reworking of the ‘Alternate Gothic’ sans-serif type style. It makes a great pairing with Lato (which translates as ‘summer’ in Polish), a  warm yet stable sans serif. Both are available in a range of different weights and variants, making this font pairing nice and versatile.

The ever-popular serifed Minion Pro works perfectly as a headline font when coupled with the nimble sans-serif Super Grotesk for body copy. Together, these fonts create a modern sense of effortless elegance.

These two libre typefaces make a great font pairing if you’re after a traditional feel. Both Libre Baskerville and Libre Franklin have been optimised for use on screen. The former is nice and readable, so ideal for use as body text, while the latter is better suited to headlines. Nine different weight options make it nice and versatile.

Working within superfamilies makes it easy to find harmonious font pairings. GarageFonts’ Freight is a great example. It’s available in a large range of weights and styles, including Sans, Text, Display and Micro versions – giving you a versatile typographic toolkit to work with.

If you’re after something more unexpected, how about this duo? The flowing stylings of Kaufmann add a touch of handwritten flair to this odd couple, and offset the straight and angular sans-serifed NeutraDemi perfectly. This font pairing might not be the most obvious match, but that doesn’t stop them playing off one another beautifully.

Due to its versatility, the reliable Minion Pro appears a few times in this list. This time it’s playing second fiddle to the bold and attention-grabbing Brandon Grotesque. This is a classic serif and sans-serif font pairing, with both typefaces remaining crisp and easy to scan in any page layout.

When creating Josefin Slab, designer Santiago Orozco wanted something between Kabel and Memphis, but with modern details. The final typeface has distinctive, typewriter-style details, and is ideal for use in headlines. Combine it with body copy in Patrick Hand for a font pairing packed with character. The latter, based on the designer’s own handwriting, has a neat, friendly vibe.

This is a famously harmonious duo, combining ubiquitous Neo-Grotesque sans serif Helvetica Neue for headlines with the classic Old Style serif Garamond for text. Mix up different weights and sizes between the two neutral families to establish hierarchy within your designs.

Another classic font pairing, this time between an 18th century Old Style serif and a late-20th century Humanist sans serif. Myriad is famously used in Apple’s corporate communication, as well as in the Rolls Royce logo.

Nova Mono is only available in one style, but that style is ideal for making a statement. Pair it with versatile sans serif Lato to stop things getting too crazy. Lato designer Łukasz Dziedzic wanted something that was nice and clear at small sizes (as we’d suggest using it within in this font pairing), but revealed some stylised effects when used larger.

Time for another superfamily, this time from Dutch foundry exljbris. Fontin has been designed specifically for use at small sizes, and features loose spacing and a tall x-height. Fontin Sans makes an ideal partner for it.

Two typefaces both have plenty of personality, but bond perfectly. An Old Style serif typeface, Minion was designed in 1990 but inspired by late Renaissance-era type. Although technically a sans-serif, Poppl-Laudatio’s subtle flared details give it a quirky edge.

Superfamily Liberation was intended as an open-source substitute for many commonly used Windows fonts, such as Arial, Times New Roman and Courier New. The Serif and Sans versions make a smart font pairing, but there are also other variations to play around with, including  Sans Narrow and Mono.

This pairing is particularly effective when Trade Gothic is used in its Bold weight for headlines, to set off Jan Tschichold’s classic Old Style serif face for text. Both typefaces are highly readable, with a tall x-height, and combine well together to give a pleasing effect.

This pair of sans serifs pair nicely to create a trendy, industrial look. Gilroy’s geometric style in ExtraBold weight is ideal for headers, while Jura Light has a wiry, structured shape that offsets it nicely. The combination is ideal for adding a strong, technical feel to your creative projects.

FontFont’s superfamily Scala started with a serif version in 1990, followed in 92 by its sans serif companion. With small caps, various ligatures and old-style figures, this family is hugely versatile and widely used in publishing.

Its clean, condensed letterforms make Bebas Neue an excellent choice for headlines. It’s free to download and open source – so you can edit it to your own particular needs through the GitHub repo, if you have the desire and skills to do so. Montserrat offers a nice contrast; especially the Light version.

One of the classic slab serifs, Rockwell was designed in the 1930s and has a huge amount of personality and attention-grabbing potential when used bold. The much more conservative serif Bembo is neutral but versatile, making for a perfectly contrasting font pairing.

Myriad and Minion have already cropped up in different font pairings elsewhere in this list, but this combination is definitely worth a look. The shouty, ultra-bold Black version of the former and the text weight of the latter can help you create a clear hierarchy in your designs.

Mixing two strong typographic personalities rarely works, as they end up fighting. However, this is an exception. Souvenir is softer and more playful than many of its Old Style serif counterparts, while Futura Bold is quirky without being too dominant.

One of the most versatile Old Style serifs, Caslon has also appeared elsewhere on this list. Its neutrality plays off against the informal, modern Dax Bold, enabling the latter to deliver its strong personality. Dax Bold is a great choice for a headline, and the understated Caslon won’t compete for attention.

These two simple sans-serif typefaces make for a clean and modern font pairing. Roboto combines geometric forms with friendly, open curves, and has been designed to offer a natural reading rhythm. Montserrat – named after designer Julieta Ulanovsky’s neighbourhood in Buenos Aires – is currently being developed into an extended family, which will give you more type pairing options to play around with.

Initially designed as an alternative to Helvetica and Univers, Antique Olive has a very tall x-height with short ascenders and descenders, which make it highly distinctive in display form. Chaparral has a modern feeling but is a much more neutral slab serif. The two together work in perfect harmony.

Only available in all-caps varieties, Aviano has sharp, edgy serifs that give it a distinctive personality. Its sans-serif variant is smoother. Combine these two tilting typefaces together to create create hierarchy in your designs.

The rather straightforward naming strategy within LucasFonts’ Thesis typeface superfamily makes the foundry’s intentions pretty clear. These two variants are totally complementary, and each comes with its own sub-varieties.

An ideal font pairing for formal or corporate use. Both Renault and Apex-New have a very similar ratio of x-height to body height for an effortless partnership between contemporary sans serif and authoritative serif.

An exljbris creation, Calluna was born out of an experiment in adding slab serifs to Museo, giving designer Jos Buivenga the idea of ‘serifs with direction’. The result is a highly distinctive text face that later spawned a sans-serif companion.

The easiest way to find perfect font pairings is by using different fonts within the same overarching typeface family. Find a so-called ‘superfamily’ and you’ll have a ready-made range of weights, styles and classifications that are specifically designed to work together.

A good superfamily will include serif and a sans-serif version of the same typeface: famous examples include Lucida/Lucida Sans and Meta/Meta Sans.

Contrast, as the name implies, is about finding totally different – but still complementary – typefaces that are each fit for their intended application. Traditionally, this involves pairing a serif with a sans serif.

As a designer, the important thing is to establish a clear hierarchy. This could be as simple as varying the size and weight of the same typeface – but where the typeface varies, careful font pairing is crucial. If you have a display face packed with unique personality, you’ll need something more neutral to do the hard work.

Of course, ‘serif’ and ‘sans serif’ are themselves broad classifications – each split into several sub-categories. Generally speaking, Old Style serifs such as Bembo, Caslon and Garamond will combine well with Humanist sans serifs, such as Gill Sans and Lucida Grande.

Finally, Modern serifs have an often very dramatic contrast between thick and thin for a more pronounced, stylised effect, as well as a larger x-height. Included in this third sub-category are Bodoni, Didot, New Century Schoolbook and Walbaum. Again, Geometric sans serifs marry best with these.

So what does all this actually look like in practice? Here’s our reference list of tried-and-testing font pairings that are guaranteed to avoid conflict.