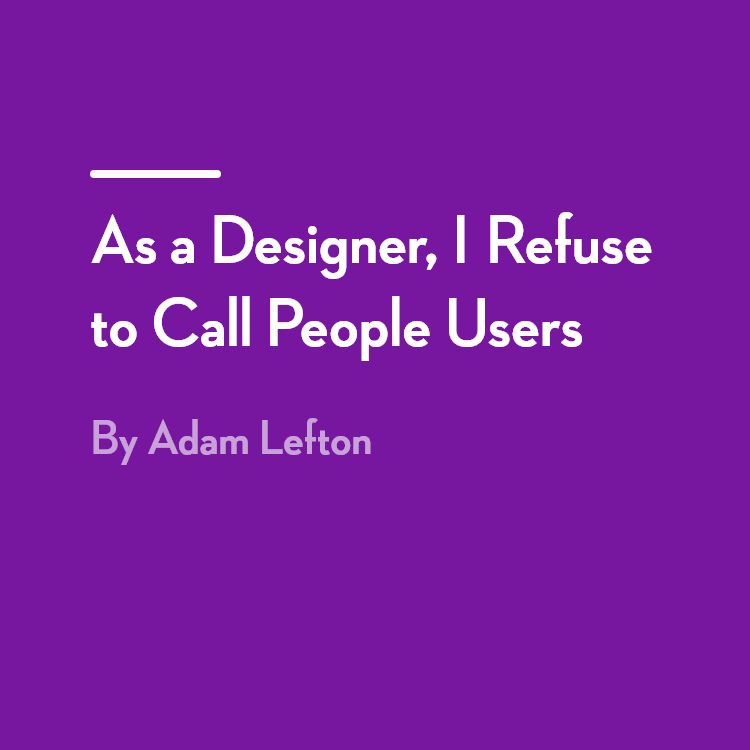 As a Designer, I Refuse to Call People Users

As a Designer, I Refuse to Call People Users

I’ve worked in UX for the better part of a decade. From now on, I plan to remove the word “user” and any associated terms—like “UX” and “user experience”—from my vocabulary. It’ll take time. I’ll start by trying to avoid using them in conversations at work. I’ll erase them from my LinkedIn profile. I’ll find new ways to describe my job when making small talk. I will experiment and look for something better.

I don’t have any strong alternatives to offer right now, but I’m confident I’ll find some. I think of it as a challenge. The U-words are everywhere in tech, but they no longer reflect my values or my approach to design and technology. I can either keep using language I disagree with, or I can begin to search for what’s next. I choose to search.

Inproduct design, “user” and the other U-words have been foundational to defining the relationship between humans and tech. The former uses. The latter is used.

But labeling people as users strips them of complexity. It reduces humans to a single behavior, effectively supporting a view of people as more like robots whose sole function is to use a product or feature. This is a poor ethos for building ethical technology. If we maintain such a narrow and flattening view as a cornerstone of our discipline, I fear we’ll make little progress toward evolving design to meet the pressing needs of a changing world.

As terms, I find the U-words unethical and outdated.

The relationship these words describe is no longer accurate. Long ago, the line between operator and tech was much more clearly drawn. Now? Not so much. Yes, when you open an application on your phone you intend to make use of it, but the past few years have taught us that the application intends to make use of you too. Incidents at Facebook and other high-profile tech companies have made it clear that use is a two-way street.

Simply put, the U-words have their origin in a more sanguine, naïve era. As terms, I find them unethical and outdated, and so I have doubts they can usher in the kind of improvements to technology we desperately need.

The term UX design began its rise to industry-standard ubiquity in 2009. And I believe we should regularly question and examine the terminology we use to make sure new terms have not been diluted or changed meanings. We haven’t been doing this, and as a result, the U-words have come to mean things I now find unrecognizable.

In an email from General Assembly, UX design was defined as a way to “create products and experiences that solve customers’ problems” so that “brands can keep those customers coming back.”

UX means solving a customer’s problem so they keep coming back for more? This is a narrow and dark definition of what good design can do, and it concerns me that it’s being used in an email that recruits prospective students to a training program promising to launch them into successful careers in tech.

When I think of my career, the first associations I have with UX and the user are almost inseparable from usability and deeply rooted in the static web. Before the internet of things, caring about the user experience meant caring about the way a person interacted with, and found information on, simple websites.

It’s 2019, and nothing is simple anymore. So many of our interactions occur through screens and devices, and the use of these new technologies at scale has had unforeseen consequences in the social, political, and emotional arenas of our lives.

The fact that people use something doesn’t always make it good. It may have been a productive measure when websites were relatively uncomplicated repositories of information, but in a world where people feel increasingly burdened by their device usage and dependency, and our most widely-used technologies have been turned against us, we can no longer consider something so basic as “use” a sign of success. It’s too low a bar to set.

Inthe design world, the user occupies a pedestal. We hold users in high regard. We care about our users. We want good things to happen for them, and so we make it all about them, going as far as to make the user our namesake. We work in user experience design organizations. We call ourselves UX designers. We parcel out development tasks into “user stories.”

So do we care? Can we care if we’re constantly referring to people with language presaging a relationship that by our own account only goes well when they keep coming back again and again, sometimes to their own detriment? A contradiction like this demands that we take a closer look at these words.

Saying “user” strips a person of their circumstances… it eliminates context and reduces people to a single act.

“User” has always had other, much more odious connotations outside our industry. Calling someone a drug user, for example, is different from saying someone has a drug problem. By saying “user,” one implies that a good deal of the responsibility for a drug dependency belongs to the person with the dependency. It suggests this use is an act of autonomy—something they do, something within their control—when in fact we know that drug dependencies aren’t anything like that and can result from complex socioeconomic and mental health circumstances. Saying “user” strips a person of their circumstances, of every influence in their life, of history—it eliminates context and reduces people to a single act.

Imagine a world where everyone operates as if this is a strong foundation for building technology that billions of people rely on to run their day-to-day lives and improve the world around them. That’s what we have right now.

Others have already written eloquently on how design needs to stop focusing on how products work in isolated user situations and begin considering how innovation can and should work on a society level. I don’t think we know yet what this looks like in practice, and certainly not at scale, but one thing I do know is that the U-words can’t fly from the masts of this new ship. They are far too uninspiring.

Without the U-words, I can start the hard work of redefining how I think about design. I can have tough conversations. I can start to develop frameworks that move beyond use and toward deeper measures of success, like productivity, happiness, and well-being. I can begin to do better.

I’m hopeful we all can. Built with love by PugoStudio